We Apologize for any inconvenience as our Thursday night call was canceled due to some technical matters. Our prayer calls will resume Sunday night 7/29.
Thank you !

We are in a Spiritual War. We are Praying for President Trump as he leads the battle.

We are witnessing a Spiritual War between Good and Evil. President Trump is the anointed one by God, working to defeat Evil. He is an Agent of Change. President Trump was chosen to lead this battle because of his strength, courage, and determination to regain the sovereignty of the republic, the United States of America, and our individual sovereignty.

Now is the time for PRAYER. Prayer is the one thing we can all do to participate. Prayers for President Trump, his administration, his family and all Americans… “We the People”, are in order.

Pray with us as we help President Trump overcome the forces of evil. They have controlled our Political system, The Financial system, Education system, the Medical System (including Big Pharma), Agriculture, Our Water Supply, and more. Their use of Vaccines, GMOs, Chem- trails and other devious tools are intended to dumb us down and impact our general well being and health.

We believe our Prayers will help President Trump and the White Hats defeat this evil once and for all, and, restore our Republic the way our founding fathers envisioned the United States of America.

Our fellow Americans are being manipulated and brainwashed by the Ministry of Smoke & Mirrors (MSM). We pray for them too!

Why has President Trump been calling out the Fake News since he announced he was running for President? Simple. President Trump recognizes the Main Street Media (MSM), a.k.a. Ministry of Smoke & Mirrors (who are controlled by the Deep State Global Elite & CIA), are running a PSYOPS on the American People. Members of our prayer team have worked in the Media for decades. We have witnessed first hand the INTENTIONAL manipulation of news, the creation of FAKE NEWS and even False Flags (staged events) designed to control the Mindset and thinking of American people, while manipulating the Political agenda & narrative.

One of the methods used by the evil elite to incrementally implement their New World Order agenda is known as “ProblemReactionSolution” or the “Hegelian Dialectic” from the German philosopher.
It works like this – the manipulating body covertly creates a problem and then directs the media to incessantly focus on it without recourse. Remember, you only need to control the top of the pyramid – most media coverage is an exercise in regurgitating what the big newspapers and T.V. stations are reporting.

“The problem could be anything – a war, a financial collapse, a rash of child abductions, or a terrorist attack. The power of the media can create the false perception that a big problem exists, even if it doesn’t … Once you have created this problem you make sure that an individual, a group or an aspect of society is blamed. This then rallies the population behind the desperate lunge for a solution to the problem. ‘Something must be done!’ they cry in unison.

The people that created the problem in the first place then come back in and offer the solution that the people demand. Remember – the people screaming for a solution do not know that the problem was artificially created in the first place. The solution to the problem is always a further curtailment of freedom and an advancement of one or more aspects of the New World Order agenda – whether that is geopolitical expansion, new laws or the implantation of new societal worldviews.”
Paul Joseph Watson, Order Out of Chaos

“The Hegelian dialectic of problem-reaction-solution. Attack yourself, blame your enemies, and tell the public you can protect them if they give up their freedoms.”
Alex Jones, “9-11 – Descent Into Tyranny”

We are praying for those Americans that still believe the narrative to wake up and take the Red Pill… we pray for these people… “The Sheeple”. Join our prayer calls and Pray for both 45 and the American People as we ward off the Fake Main Stream Media.

We have God on our side! (They worship Satan) We pray for 45-Donald J. Trump.

President Trump (#45) is leading a battle against a global elite force for evil. Our President, working in concert with good actors around the world, is fighting the wealthy elite bankers, corporations, governments, intelligence agencies (The Deep State) and other entities that want a one world government. This plan is an evil plan that has been in the works for decades. Prayer has been used to help stop wars, cure illness, and in our every day lives to help us through our challenges.

Now, we need to pray for President Trump, his family, his trusted cabinet, and all the good actors around the world that are working to defeat the tyranny of the global elite. Through our prayer we will send a strong message to #45, his inner circle and our Military. We will also send a strong message to the Satanists that want to destroy our President and our Country.

SHOP our Store and Join our Prayer Calls 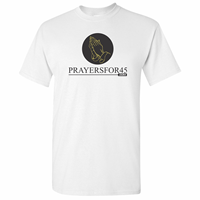 Help us spread the word & get the Prayers out with our 100% Cotton T-shirt in bright White proudly displaying our Logo.

Enjoy a cup of Coffee with Prayersfor45

Prayer is powerful we know… Now you can pray with your Cup of Joe!  Buy one or save on the purchase of a set of 2! 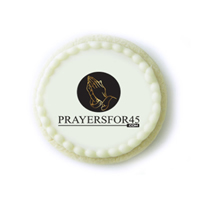 Prayers are sweet… and our Prayersfor45 cookies can’t be beat.

Iced Prayersfor45 Sugar Cookie.  Individually wrapped in Cello.   Great snack for those Prayer parties with friends and family.   Not cheap eats… but make a wonderful gift!